Have you heard about Sixth Disease (Roseola Infantum)?

Sixth disease, also known as roseola infantum, exanthem subitum or commonly as ‘baby measles,’ has got to be one of the most common viral infections affecting children below 2 years of age. As it affects young children rather than adults, having roseola in childhood is thought to provide some lasting immunity towards this illness.

This childhood illness is caused by human herpesvirus (HHV) type 6. It spreads in the form of tiny droplets when an infected person speaks, coughs or sneezes. Once the virus enters the body, it can take up to 14 days for it to manifest itself.

A child infected with this virus often presents with a high spiking temperature of more than 39 Celcius, typically lasting for three to seven days. Other associated symptoms include irritability, poor appetite and mild runny nose or cough. However, once the fever fully resolves, a characteristic red-pinkish, flattened rash starts appearing over the trunk, face and limbs. Despite how extensive this rash may seem, it rarely causes any itch or discomfort to the affected child.

A child with roseola will remain infectious for at least 1-2 days after the fever subsides. 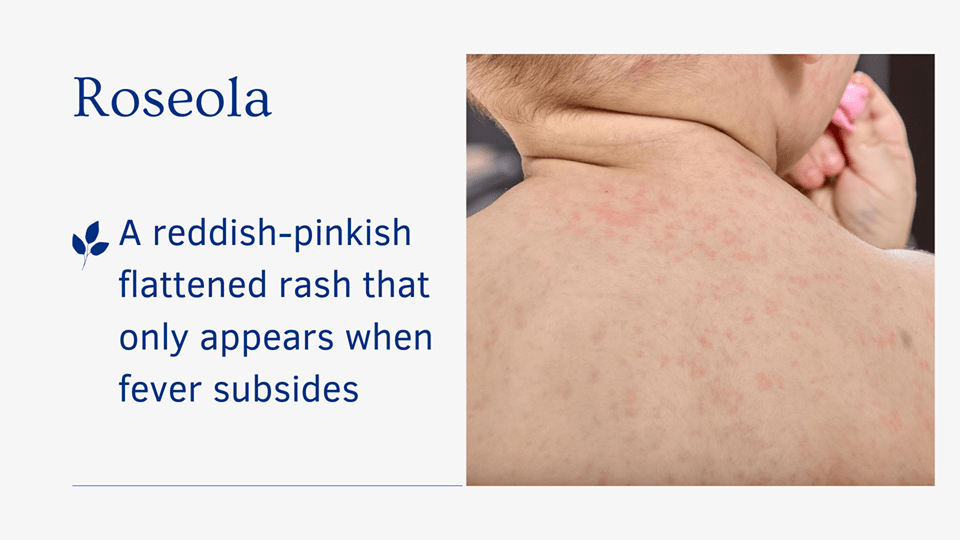 So how do you differentiate this viral rash compared to other viral infections?

? The main clue is that this rash will appear only once the fever has fully resolved. In contrast, the rash in measles, rubella and scarlet fever occurs with the ongoing fever.

? The other important clue is with the onset of rash, the affected child shows overall improvement, has a better appetite, is more active, etc. In the case of dengue fever, the rash also appears when the fever subsides. However, the child may develop warning symptoms like vomiting, persistent diarrhoea, tummy pain and bleeding tendencies, i.e. the affected child takes a turn for the worst!

A child having a rash can be a worrisome thing. Always feel free to consult your doctor whenever in doubt. ?‍⚕️